How well does India do according to the HLO dataset?

I was curious to see how India does compared to other countries in the HLO dataset. The HLO dataset reports HLOs by subject and year so I first calculated the mean HLO for the most recent year data was available for each country and merged in data on GDP per capita from the World Bank. The figure below plots mean HLO for the most recent year available versus log GDP per capita for each country in the dataset.(I also label several other countries for reasons that will become clear in the next section.) According to the HLO dataset, India does about as well as would be expected given its level of income. 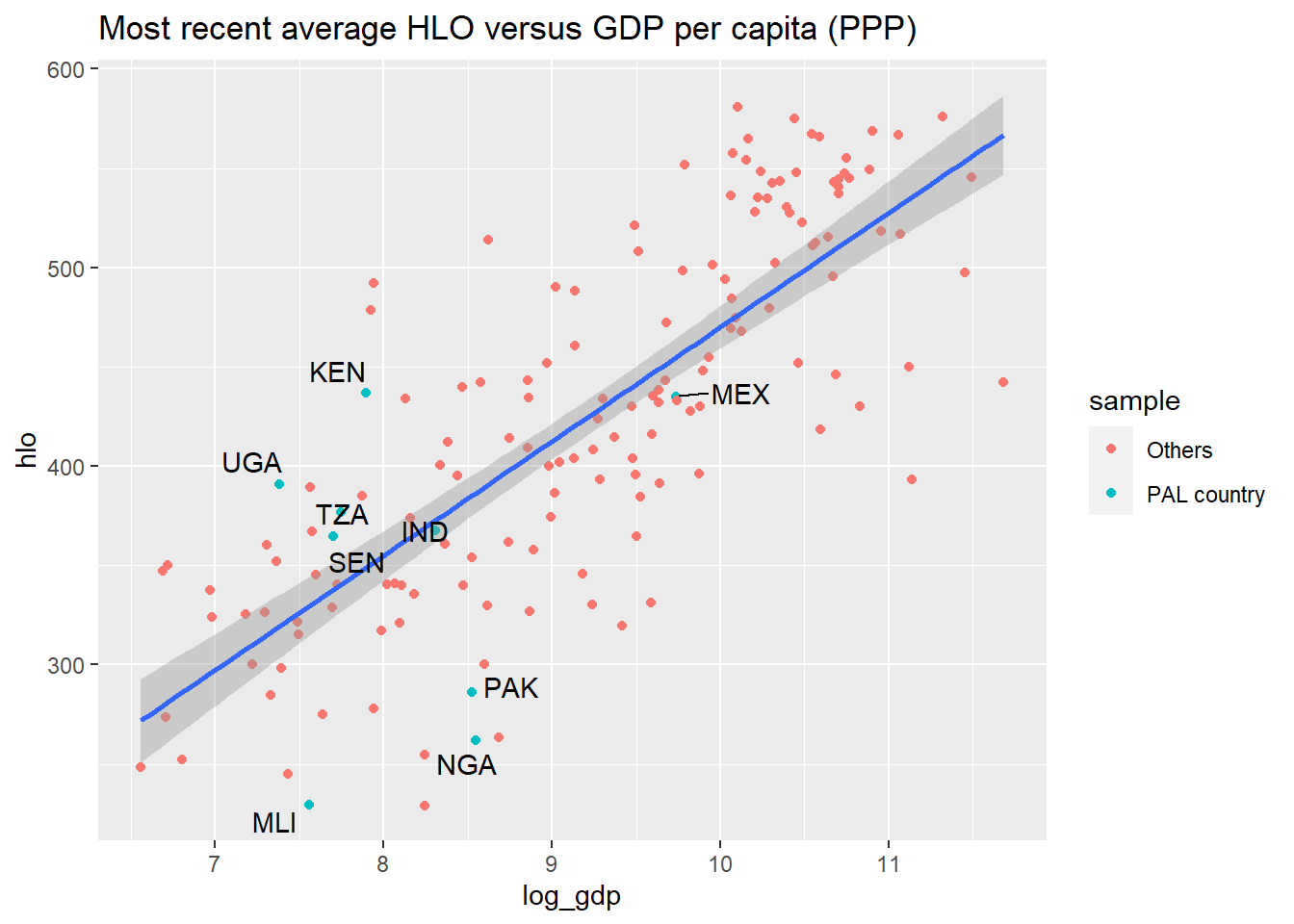 Comparing India to other countries based on ASER

The HLO dataset is fantastic but to generate comparable data for so many countries the creators of the dataset had to rely on some heroic assumptions. The HLO value for India relies entirely on one assessment: the 2009 PISA conducted in Tamil Nadu and HP. Surprisingly, according to the IHDS 2012 survey, students in HP and Tamil Nadu are fairly representative of students overall. The code below shows that the population weighted average of the two states is right around the average for the country overall. (HP does really well but Tamil Nadu does surprisingly poorly. I am using IHDS here rather than ASER because ASER excluded rural areas and a very large share of Tamilians live in cities. Also, I am averaging ASER scores for all children 8-11 in the sample which is not a great idea but should at least give a rough sense of HP and TN’s relative performance.)

While Tamil Nadu and HP, taken together, are not obvious outliers when it comes to education generating a data point for the country as a whole from a single survey conducted more than a decade ago in only two states is not ideal.

Another, in my opinion better, approach to comparing India to other countries on learning outcomes is to use data from ASER and other assessments inspired by ASER. Several countries around the world have completed assessments very similar to ASER. This webpage contains stats from ASER and other ASER-like assessments conducted in Pakistan, Kenya, Uganda, Tanzania, Mali, Senegal, Mexico, and Nigeria in 2015 or 2016 on the share of 5th grade children who can read a grade 2 text. (It also has figures for numeracy, but they aren’t really comparable across countries. For more on this very cool effort, check out the People’s Action for Learning Network). The advantages of using ASER-like assessments to compare countries are that:

The downside of using these assessments is that we only have data for a few countries and, in India and Pakistan, ASER was only conducted in rural areas. To correct for the fact that the ASER was only conducted in rural areas in India and Pakistan, I add the difference between the share of rural and urban children who could read a class 2 text from the IHDS survey (which is about 10 ppt) to both the India and Pakistan ASER scores. (This is a strong assumption but in order to compare scores across countries some strong assumptions are required.)

Results from comparison of ASER scores

The first scatterplot below compares ASER scores with HLO scores on reading. For countries with multiple HLO scores, I used the score which was nearest in time to 2015-16 since that is when the ASER scores are from. The second scatterplot plots ASER scores versus log GDP per capita.

When we use ASER scores, India does considerably less well when compared to other countries. Pakistan, Kenya, Tanzania, and Uganda all have lower GDP per capita but similar or higher ASER scores. Senegal and Mali do worse on ASER but also have much lower income, Mexico does much better but is also much richer, and Nigeria does a little worse than India.

If we compare the figures below with the first figure above (the one with all the HLO scores) we see that the reason for India’s comparatively lower performance is that Nigeria and Pakistan do much better, relatively, on ASER than on the HLO measure. In both figures, Kenya, Tanzania, and Uganda do much better than India (considering their relatively low income levels) but in the first figure this is balanced out by the relatively low performance of Pakistan and Nigeria. 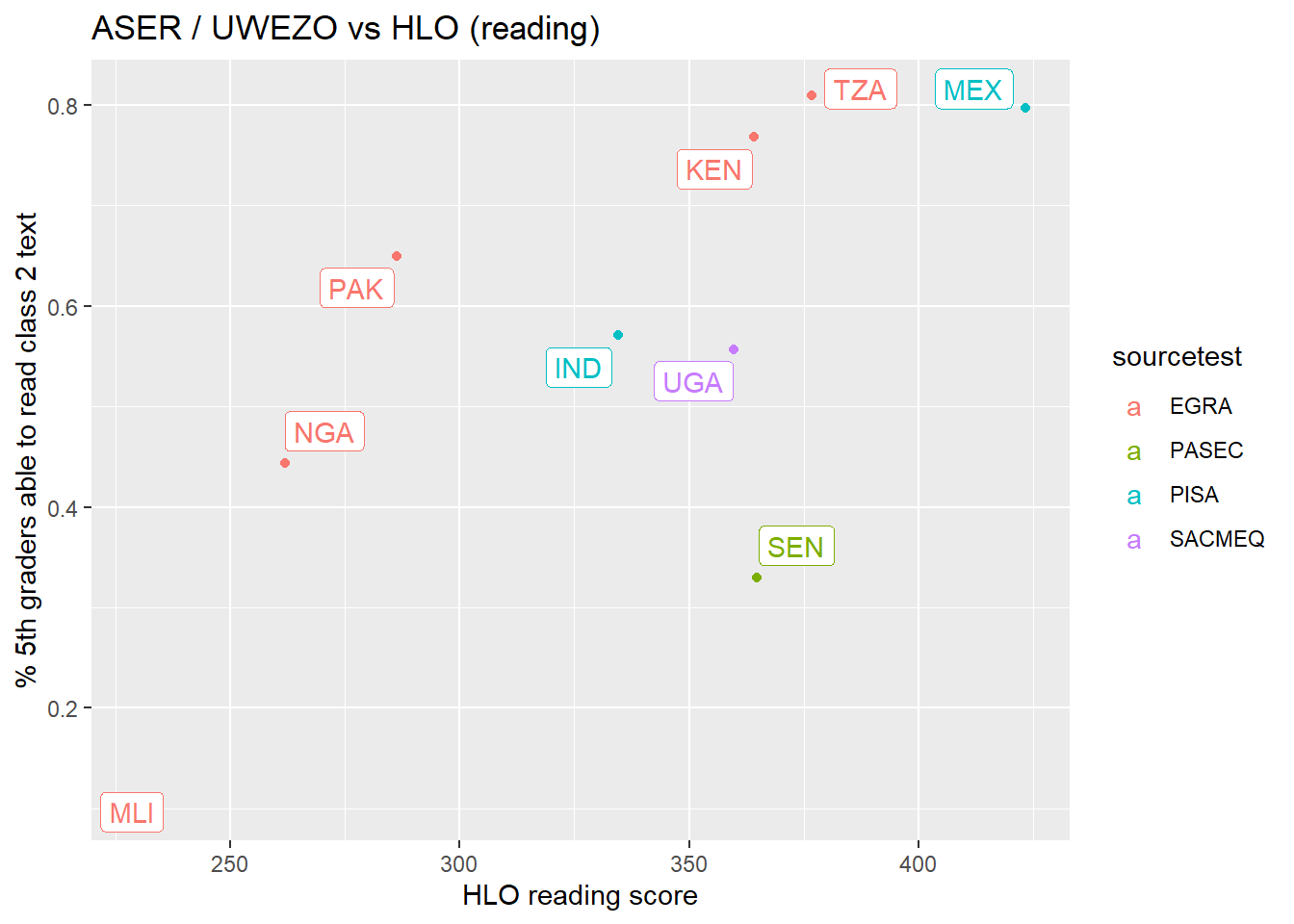 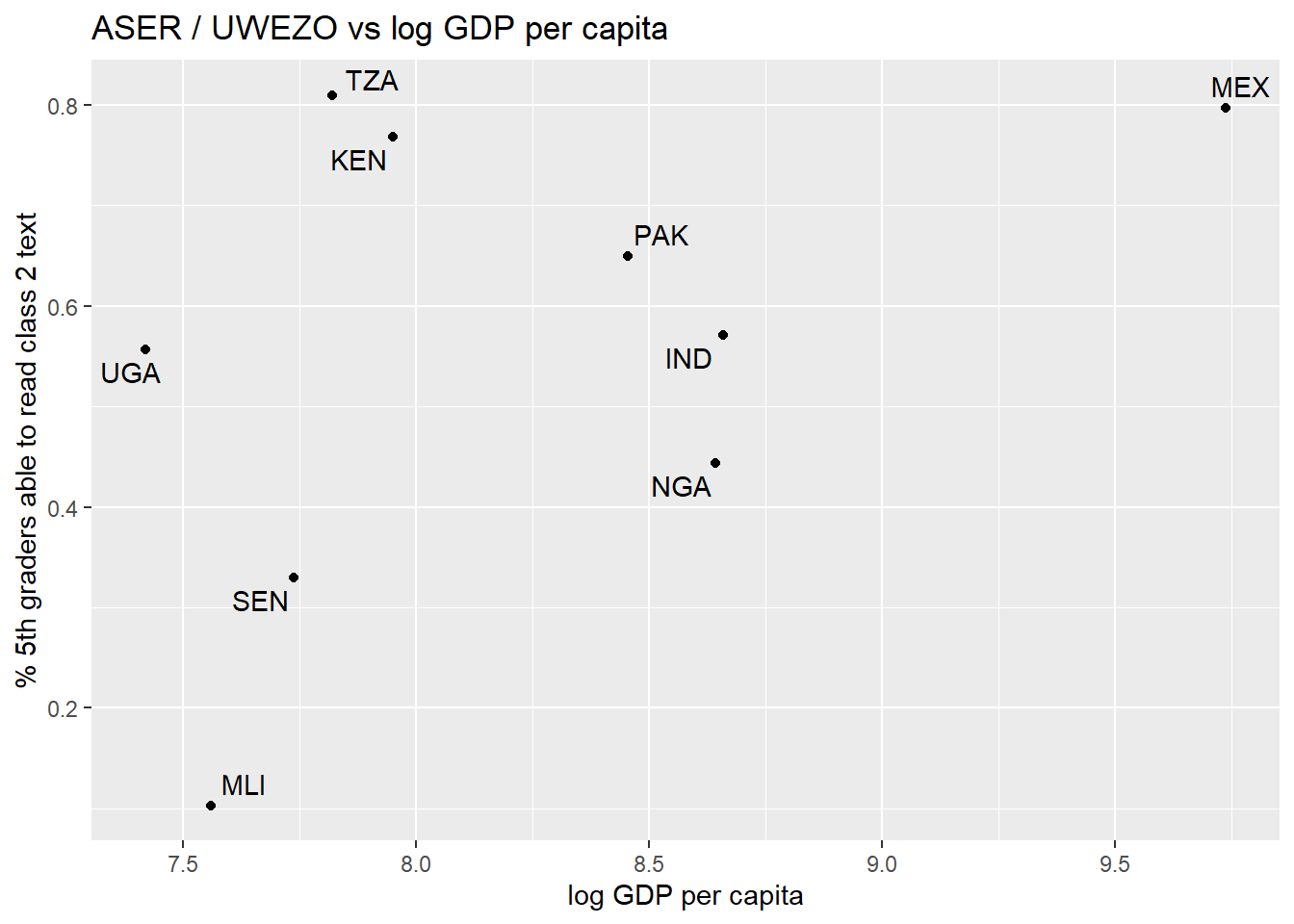 Does any of this matter?

I ran this analysis because I was curious how India’s education outcomes compared to other countries. That said, I’m not really sure it matters all that much. We know that many countries, India included, could do far better in educating their children. And, in India as in the US, country rankings (as long as they don’t involve cricket) don’t seem to generate much public interest. Better data which allows us to compare learning outcomes in India to other countries would be nice but I think that data which allows us to better track changes in learning outcomes within India is far more important. Andres and I will (hopefully) be writing more on this soon.